Motives and Politics of Abolition Two hundred years ago, when the United Kingdom Parliament abolished the British trade in enslaved Africans, the English “establishment” indulged...

Motives and Politics of Abolition

Racism poisons our life conditions. It makes people hate us before they even know us! They redefined us out of humanity so that a person from Iceland got a concept of us and they never saw us or interacted with us. So what they’ve done is poisoned how people relate to each other — Maulana Karenga

But in all their celebrations and self- praise it seemingly never occurred to them to take a little time out to engage in some critical self- examination or to make an effort at atonement for all the damage that they had done to the nations and peoples of Africa over a period of some 250 years. Instead of focusing on the untold millions of Africans that they had victimized – including the 1 million enslaved Africans that were still incarcerated on plantations in the British West Indian colonies in 1807 – they were consumed with praising themselves and their alleged abolitionist leader – William Wilberforce.

One would have thought that with the benefit of 200 years of hindsight the British establishment in the year 2007 would have been able to recognize the immorality and folly of the behaviour of their 1807 forefathers and would have sought to make amends in their 2007 commemorations. Alas, this was not to be, and the same moral deficiencies of 1807 are being repeated in 2007. Once again, their focus is on self-praise, selfcongratulations and the propagandistic eulogizing of William Wilberforce. It is against this background therefore that I propose to bring to public attention a few “inconvenient truths” about Mr. William Wilberforce and his true role in the campaign to abolish the British slave trade and system of racialised chattel slavery. Let us begin by placing Wilberforce in context. After establishing and operating a British trade in enslaved Africans for more than 200 years, twelve Englishmen came together on 22nd May, 1787 to form a “Committee For The Abolition of The Slave Trade”. The 12 comprised Granville Sharp, Thomas Clarkson and ten members of the Quaker faith. 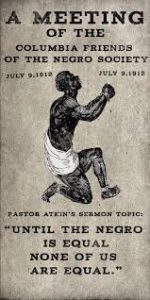 Two years later – in 1789 – William Wilberforce, a wealthy 30 year old Member of Parliament agreed to join and assist the Committee. However, whilst Committee members like Thomas Clarkson took upon themselves the onerous and dangerous work of traveling the country, establishing sub- organizations and collecting evidence about the evils of the slave trade, Wilberforce basically confined his efforts to introducing once-a year motions in the House of Commons calling for the abolition of the slave trade. On 12th May 1789, Wilberforce rose in the House of Commons to make his first speech against the slave trade and revealed a pattern of thought that was to persist with him throughout his entire career. To begin with, Wilberforce attacked no one in Britain for the evils of the slave trade – certainly not the wealthy, conservative absentee planters with whom he shared a similar social background and social life, and not even the avaricious merchants and ship-owners who Wilberforce described as “men of humanity” in his speech. Rather, his harsh words of condemnation were reserved for “African chiefs and kings” whose “personal avarice and sensuality” he blamed for the maintenance of the slave trade. Also characteristic was the manner in which the debate on Wilberforce’s motion ended, with Wilberforce meekly agreeing that it be suspended until the House of Commons could carry out further investigations into the trade.

In the debate on his second motion on the slave trade – introduced in the Commons in 1791 – Wilberforce turned with a vengeance on the people of Africa, declaring that “negroes are creatures like ourselves, but their minds are uninformed and their moral characters are debased…their state of civilization is very imperfect, their notions of morality extremely rude” He also used this speech to make it absolutely clear that in his opinion the enslaved Africans were not “fit” for freedom and that he was not asking for the abolition of slavery. And in a later speech he characterized Africans as “an ignorant, low, peevish, a bloody and a thievish race”. Indeed, the only form of abolition that Wilberforce was prepared to contemplate was a “gradual” abolition in which freedom would come at some time in the distant future. 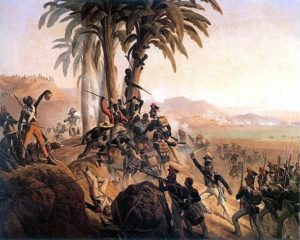 Also noteworthy about this phase in the abolitionist campaign was Wilberforce`s refusal to support the so-called “anti-saccharism movement” of the early 1790’s – a popular boycott of slavery-made West Indian sugar. Wilberforce was so intent on distancing himself from anything that smacked of stirring up popular feeling that hedeclared the time was not right for a boycott. And then the mighty “Haitian Revolution” exploded in 1792, with armies of self-liberated Africans led by Toussaint L’ouverture, Henry Christophe and Jean Jacques Dessalines dramatically wrenching the wealthy French colony from the hands of white enslavers and abolishing slavery in Haiti! This epoch- making event proved to be a “litmus test” which literally separated the abolitionist “boys” from the abolitionist “men” in Britain.

Reeling from public criticism that their anti-slave trade campaign would provoke a similar black uprising in the British West Indian colonies, Wilberforce and many of the other abolitionists went to great lengths to distance themselves from the Haitian Revolution and to emphasize that they had no intention of advocating the abolition of slavery. Indeed, when English troops invaded black ruled Haiti, Wilberforce rose up in Parliament to denounce a motion calling for the removal of the troops! 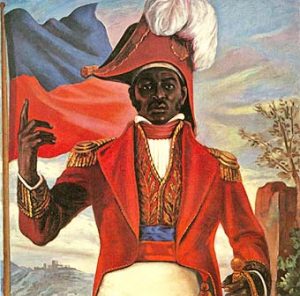 So extreme was the retreat from activism that in May 1794 the Abolition Committee (now known as the Abolition Society) gave up their rented offices.Subsequently, the Society met only occasionally in 1795 and 1796, and ceased meeting altogether in 1797 for an extended 7 year period!

Wilberforce, for his part, presented a watered down anti-slave trade bill in 1794, which was easily defeated. Several other bills he introduced in the mid 1790’s suffered a similar fate, and Wilberforce eventually stopped introducing abolition bills altogether towards the end of the 1790’s.

The American historian, Adam Hochschild, summed up Wilberforce’s record as a Parliamentary advocate of abolition as follows:- “Year after year, Wilberforce introduced an abolition bill, but he remained as poor a strategist as ever…He would propose the bill either too late in the legislative session or when MPs were distracted by some other issue,and he was too disorganized to muster his supporters”.

When finally, the British Parliament came to pass an abolition bill in 1807, it was not a bill introduced by Wilberforce that was debated. Rather, it was the governing administration of Lord Grenville that introduced the slave trade abolition bill as the official policy of the British government. And significantly, when, during that 1807 Parliamentary debate, a young Member of Parliament proposed that all infants born to slaves henceforth be free, Wilberforce opposed this idea. Wilberforce also famously denounced the British Government for prohibiting the whipping of enslaved women, and it was he who first introduced the notion that in the event that slavery was abolished, the white slave owners should be compensated for their loss of property.

It is not surprising therefore that a couple years after Wilberforce’s death in 1833, Thomas Clarkson commented that Wilberforce “cared nothing about the slaves, nor if they were all damned, provided he saved his soul”. Yet another abolitionist – George Stephen – characterized Wilberforce as a man of “busy indolence” who “worked out nothing for himself” and who felt “too much deferential regard for rank and power”.

But perhaps the most incisive critique of Wilberforce came from the radical female abolitionist of the period Elizabeth Coltman, who noted that – “so long as it was maintained that the slave was not fit for freedom, he would remain a slave, since it was the system itself which prevented him from ever being “fit” for anything but slavery…To say, therefore, as did Wilberforce that the slaves had to remain slaves until they were fit to be free was condemning them to perpetual bondage”. 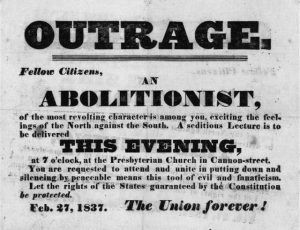 The hard historical facts clearly establish that Wilberforce was no “friend” or “brother” of the African – enslaved or free. Wilberforce was first and last, a socially conservative churchman who belonged to the so-called “Evangelical” wing of the Anglican Church, and who was driven by the idea of elevating the morals and manners of what he considered to be depraved elements of his beloved England, thereby saving the soul of his nation from a harsh judgment by Divine Providence. As a result, Wilberforce was capable of despising Africans and supporting their continued enslavement, while at the same time trying to save his nation from the eternal judgment which, in his religiousimagination, the obvious evils of the slave trade would call forth. These contradictions resulted in Wilberforce’s abolitionism being “half-hearted” and “ineffectual”. It should be noted as well that Wilberforce’s severely limited “abolitionism” was but one component of a cluttered agenda of bourgeois moral and social reformism. His career was actually devoted to self-righteous agitation against those he considered to be“lukewarm Christians” and against such “transgressions” as sensuality, swearing, drinking, fornication and “Sabbath-breaking”. In addition, as a socially conservative Parliamentarian he supported virtually all of the repressive measures of his Age, including a law that provided 3 month jail terms for anything remotely resembling labour organizing, an activity which he considered to be “a general disease in our society”. He also trenchantly denounced the idea of women being permitted to play any role in the abolition movement.

So it would be totally wrong to credit Wilberforce with having made “a magnificent contribution” to the abolition of the British slave trade, much less to the abolition of slavery itself. The reality is that the abolition of the British trade in enslaved Africans was precipitated by the drastic decline in wealth and importance to Britain of the West Indian colonies; the coming on stream of both the Industrial Revolution and the British Empire of the East; and the incessant slave rebellions which constantly portended the likelihood of “abolition from below” by the slaves themselves. Indeed, one can legitimately charge Wilberforce with setting in place trends which led to untold grief for African people from the mid 19th century up to today. You see, Wilberforce made respectable the notions of “ White Superiority ” and the alleged “white man’s burden ” to bring “civilization ” to what he considered to be ignorant and benighted Africans through the imperialist carving up and colonization of the African continent . There is therefore a direct line between Wilberforce’s brand of racist, paternalistic abolitionism and later British imperialism and colonization.

If indeed we are looking for historical personalities who made “magnificent contributions ” to the abolition of the slave trade and slavery itself, it would make much more sense to look to our own black revolutionaries, most of whom actually gave their lives in the armed struggle to end slavery. Rather than singing undeserved praises to Wilberforce let us instead lift up the names of Tacky, Nanny, and Sam Sharpe of Jamaica, Cuffy and Quamina of Guyana, Balla and Pharcell of Dominica, Chatoyer and Duvalle of St. Vincent , Bussa, Nanny Gregg and Washington Franklin of Barbados, Daaga of Trinidad, Fedon of Grenada, and of course the magnificent “black Jacobins” of Haiti.

Liked it? Take a second to support David Comissiong on Patreon!

is a Vincentian-born political activist, who is founder of the Clement Payne Movement, and once served as head of the Barbadian government's Commission for Pan-African affairs. He is a frequent critic of globalization and United States hegemony. Commissiong is one of the key Pan-Africanists in Caribbean politics. He starred in the multi-award winning documentary 500 Years Later (2005), which starred Maulana Karenga, Muhammed Shareef, Francis Cress Welsin, Kimani Nehusi, Paul Robeson Jr, Nelson George, and many others.