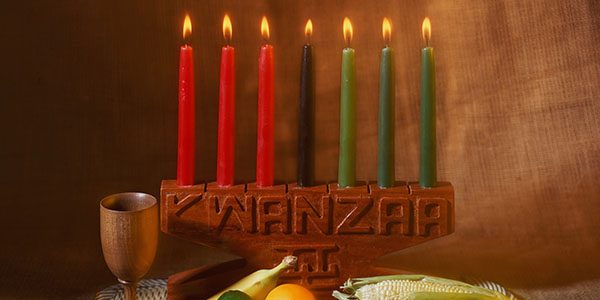 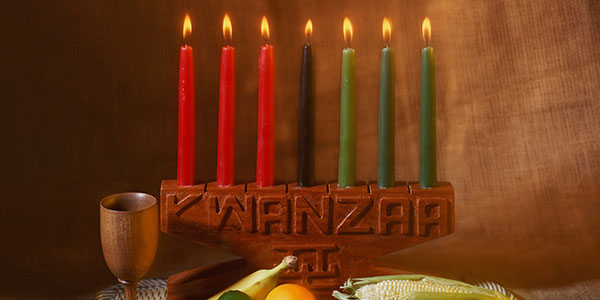 The Pan-African Diaspora Holiday We must carve out of the hard rock of reality the place we want to stand on and leave as...

Kwanzaa is a cultural holiday, celebrated from December 26 to January 1, which is profo 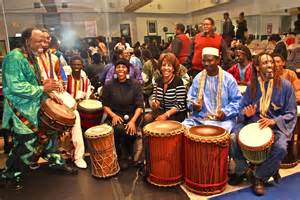 und because it reclaims what was lost during the African Holocaust—that sense of an African connection. It replies to the ongoing mental slavery experienced from the Diaspora being culturally orphaned in the West.

Kwanzaa is an authentic African Holiday created in the African Diaspora. It is becoming part of traditional African American, and African diaspora cultural heritage. All holidays have their roots somewhere, and Kwanzaa is an indigenous African American creation. Which is no more or less authentic than Christmas (which is a “made-up” holiday of pagan origins) [1], most modern Jewish rites, or Islamic Eid, or Islamic Mawlid. 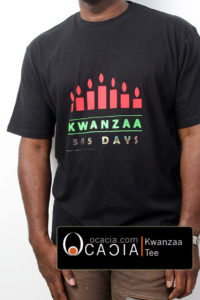 Did you know: Swazis call first harvest Incwala. Zulus call it Ukweshwama. Annual day to celebrate the harvest and King’s fitness to rule. 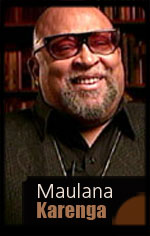 Of all the criticism detractors launch at Kwanzaa, it is amazing none of them have a leg to stand on. Most critique is Ad Hominem (against Karenga). But Karenga is not Kwanzaa, when Karenga is dead and gone, the virtues of Kwanzaa will not depend on his personality. The term “Created” is used to detract from its authenticity. But every culture creates, Kwanzaa is just a modern creation. Holidays are created in Africa all the time, like “Africa day”, and “Reconciliation Day” for all kinds of questionable unproductive reasons.

Swahili | Some try to get technical, and say Kwanzaa is not from West Africa, and is a mismatch of bits and pieces and therefore inauthentic. But any serious reader of African culture, especially African Diaspora culture, would know that the involuntary Diaspora is a quilt of African values, of Pan-African values, and Pan-African culture. The Diaspora use their African memory to create and find identity in the spirit of an Africa lost during enslavement. (And African culture did reach America from the Swahili Coast of Mozambique). Pan-Africanism is a composite of a diverse array of African rituals and values, taken from a cross-section of Africa.

Many African Americans, not knowing their actual ethnicity, will take garbs from Nigeria and names from North Africa and the Swahili Coast: Thank the African Holocaust for them not knowing their actual homeland. And we could go deeper, when we understand Africa from a Pan-African lens. So Karenga is 100% authentic to use his African Diaspora creativity to create a new Pan-African Diaspora experience, by taking what is relevant– the Pan-African Swahili languages and parts from the diverse continent, which produced the diverse Diaspora. It is beautiful and genius to compile these sacred things to repair, what must be repaired with dignity and an African reconnection. 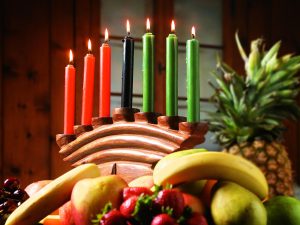 It is a very strange argument, because what isn’t “made up” are there naturally occurring Holidays that seamlessly appear in history? But what is unchristian and hypocritical, is when European Christians, who created the African Holocaust, vociferously attack Kwanzaa as “making it up,” of being “fraudulent.” Worried about losing their enslaved flocks? It is like the pot calling the kettle black, considering the obvious history of Christmas (as well as the commercial exploitation by big businesses) and all the other made up.

Eurocentrics inventions and dubious content, which is treated as mainstream. [1] And neither do Easter Bunnies and Santa Claus, but yet they are tied to a Christianity. And people can do as they may, but then listen to their own Bible and deal with the plank in their own eye first.

Karenga’s most outstanding contribution to the forward flow of humanity is to give the African Diaspora their “own” holiday. Considering the legacy of slavery and the destruction of the African connection it is beyond critique. It is clear that the ongoing Holocaust against African people is mask in the voice of the detractors, as they continue to try to make African people globally divided and culturally orphaned. Kwanzaa ultimately, like the message of Jesus and Muhammad, is there to heal. In the case of Kwanzaa the target is the disenfranchised African Diaspora. Beyond nit picking at minutia issues like “Why Swahili?” the entire message is redemptive and constructed on rebuilding African people’s humanity.

Who is Kwanzaa for? 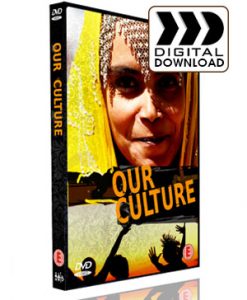 Should people in Africa also celebrate Kwanzaa? Maybe as a sign of unity with the Diaspora, but it would be a little odd for all of Ethiopia (as a good example) to adopt Kwanzaa. At the roots of Kwanzaa is the need for the Diaspora to re-connect with something stolen/missing. Nothing is missing in parts of Africa with deep cultural and historical connections. Now the Caribbean and South America and the UK, 100% so. And maybe the AU should celebrate it symbolically to strengthen ties with the Diaspora.

If ever there was a living African-American philosopher on par with all those in antiquity it would be Dr. Maulana Karenga. Such an influential figure in Africanizing the descendants of the enslaved Diaspora he is can be considered an icon. And all great men are controversial, and do questionable things, but that does not diminish their contributions to, as he would put it, “the forward flow of human civilization.” 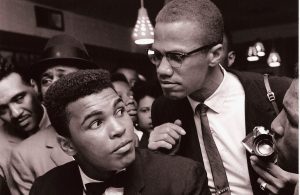 Malcolm continued the legacy of Garvey when he made the profound declaration of crimes against humanity. But since Malcolm most have been concerned with a local revolutionary outlook; disconnected from the broader Pan-Africanism. However, for much of Karenga’s career as a public intellectual he has carried forward the virtues of Malcolm’s mission culturally and politically. And when we reflect on the core of the conflicts with the Black Panther party and the disagreements with the late Hakim Jamal it was linked to the African cultural argument. While most were content for a better sized crumb Karenga wanted a complete cultural paradigm change: A profound move for a person born into the harsher side of the American racist system. So no loner would we look to the ideology of Europe, but to Africa. No longer will we model our humanity on Greece, but back to Ancient Egypt.

No longer would English be our lingua franca, but Swahili. No longer would our culture be located in America, but in Africa. And on all of these issue history has vindicated Karenga while he is still with us as an elder.

Karenaga and the Black Panthers were also victims of the FBI’s COINTELPRO program. A program which was to “expose, disrupt, misdirect, or otherwise neutralize” groups that the FBI believed were “subversive – Create dissension between groups (e.g. by spreading rumors that other groups were stealing money or bad mouthing each other). And it is sad that despite the stark lesson of history many continue to extend the success of COINTELPRO by letting ego and myopic spoil good relations, and good work.

It is immature and simplistic to take the flaws of the founder and impose them on their work. This is the spectacle to distract people from the values of liberations brought by their liberators. Was Nkrumah without blemish? Was King without flaw? Was Bob Marley not abusive to his wife? Do we throw out everything because of these human failings which occurred to oppressed people in their growth stages? African are humans, full of contradictions that are there to also be learned from. And clearly we have not when we look at the vulgar individualism and egos that smash unity over trivial things, not critical to the bigger hierarchies of liberation. 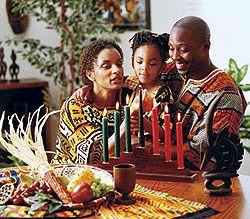 We are not cultural orphans of White America, only struggling for a better share of the American pie. Our journey must, if to be meaningful, take us back to our African path and the continuation of our cultural journey in modernity. Africa is our reference and Karenga has always articulated this reconnected us not to 50 years ago, or to “black identity” created in a 1960’s reactionary vacuum but right back to the Nile Valley civilization. Karenga has from this solid ethical rock formulated viable solutions for Africans everywhere. We are forever indebted to his wisdom an

d his dedication to creating real ethical institutions to carry on our African culture uninterrupted.

Several things preserved us as an African people throughout the Holocaust of enslavement: The first and most important thing I think is our deep spiritual roots. Our capacity to believe in our humanity and to hold on in despite of the most dehumanising situation –Maulana Karenga

Liked it? Take a second to support Alik Shahadah on Patreon!

'Alik Shahadah is a master of the Documentary format and progressive African scholar. Shahadah uses film for social revolution. A multi-award winning recipient including the rare UNESCO award for his critically acclaimed film on slavery 500 Years Later.. He is best known for authoring works, which deal with African history, social justice, environmental issues, education and world peace. He states his primary motivation for making these films was being frustrated with "Tarzan's voice" as the central narrator in African stories. He noted that while scholarship challenges these issues, the common knowledge of the majority is generally unaltered, writing alone is not enough, the ultimate tool for re-education on a mass level is film